The 2022 ACON Honour Awards finalists have been announced

As the Principal Partner of the 2022 ACON NSW Honour Awards, we congratulate all finalists on reaching this point in the awards. We look forward to celebrating the winners on 17 August 2022. 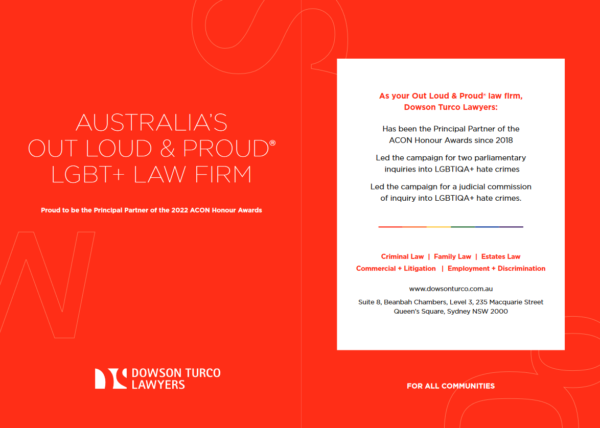 We are members of the LGBTIQA+ community and we have been fighting for our community since our humble beginnings.

Ann-Marie Calilhanna: For her passionate and dedicated work in documenting Sydney’s vibrant LGBTQ culture over 20 years through photography, and for supporting LGBTQ causes, organisations and businesses. A beloved figure in Sydney’s LGBTQ scene, Ann-Marie has been at the forefront of capturing people, places and events for the past two decades, ensuring a lasting photographic record of our unique LGBTQ history and heritage.

Brodie Gray: For her work in supporting LGBTQ communities in the Illawarra-Shoalhaven. In 2021, Brodie established the LGBTQ social and support network, Queers Down South, which provides a much-needed forum for sexuality and gender diverse people in the south coast regions of NSW. Queers Down South enables networking, connection, knowledge-sharing and capacity-building for LGBTQ people in the NSW south coast, helping to improve community strength and resilience.

Katherine Wolfgramme: For her tireless work as a trans advocate, activist and educator. As a consultant and trainer, Katherine delivers important inclusion training for large corporations and organisations that helps deepen understanding of trans people and communities. Katherine is also a passionate activist, elevating causes and issues that progress trans rights, empower trans lives and strengthen trans health and wellbeing.

Nyx Harris: For their work in advocating for the health and wellbeing of sexuality and gender diverse autistic people. Through their involvement with Autism Spectrum Australia, Nyx provides vital support to LGBTQIA+ autistic community members, ensures access to vital support mechanisms and pathways to appropriate services, advocates for greater inclusion and serves as a role model for young autistic community members. 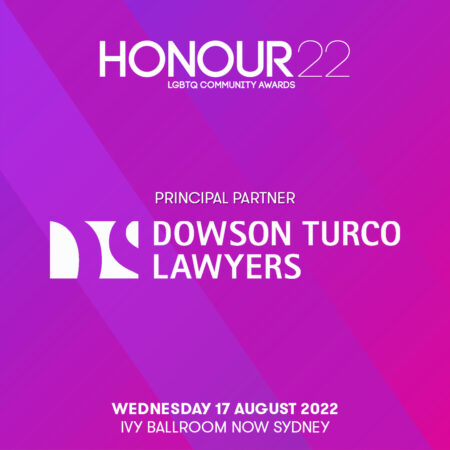 As Australia’s only Out Loud and Proud® LGBTQ+ law firm, Dowson Turco Lawyers (DTL) is thrilled to announce its return as Principal Partner of the ACON Honour Awards 2022.  DTL has been Principal Partner since 2018, marking this year as the firm’s sixth time as proud sponsors of the annual awards  celebration.

An ongoing collaboration with the ACON Honour Awards has allowed DTL to be involved in strengthening the richness of the LGBTQ+ community by recognising individuals, businesses, or organisations that have displayed outstanding leadership or exceptional service to the LGBTQI+ community in NSW.  We are grateful for ACON’s approach to authentic recognition of our community stars.

DTL remains in a strong position to contribute to the LGBTQ+ community having been an LGBTQ+ firm for all communities across Australia – since 2008 – and having led the campaign for parliamentary and judicial inquiries into LGBTQ hate crimes.  DTL will continue to engage in community collaboration on all fronts to celebrate and reward individuals and businesses who take part in progressing the community’s safety and prosperity.

Nicholas Stewart, Partner at DTL, said: “It is important that we celebrate and acknowledge the efforts of those who make an outstanding difference to the lives of LGBTQ+ people in NSW.  The ACON Honour Awards aspire to do exactly this and we are thrilled to be able to contribute to this event as both a Principal Partner and a long-time supporter of the Honour Awards.”

DTL Managing Partner, Stacey Dowson said, “The Honour Awards represents an array of diverse achievements and efforts towards the LGBTQ+ community.  It is an important event that DTL feels extremely proud to be a part of, solidifying our standing as the trusted lawyers within the LGBTQ+ community.”

Dowson Turco Lawyers welcomes the NSW State Coroner’s decision to hold a coronial inquest into the death of Jasmynd GibbsDTL2022-03-16T15:57:06+10:00 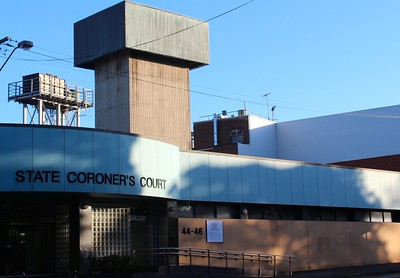 decision to hold a coronial inquest into the death of Jasmynd Gibbs, an Indigenous man who died six weeks after being released on parole and, who was at the time of his death, under the supervision of NSW Community Corrections.

A request for an inquest into a person’s death, like that of Mr Gibbs, is subject to the powers of the NSW State Coroner under the Coroners Act 2009 (NSW). The objective of an inquest is to enable coroners to investigate certain kinds of deaths in order to determine the identities of the deceased persons, the times and dates of their deaths and the manner and cause of their deaths, but also to enable coroners to identify systemic failures in health, law enforcement or other services, and make recommendations to improve services in an effort to prevent similar deaths occurring in future.

DTL crime partner, Nicholas Stewart said, “It is in the public interest that an inquest be held into Mr Gibbs’ death because he died in circumstances, while on parole (and therefore under supervision of NSW Community Corrections). Mr Gibbs suffered a disability and died an unnatural death, despite being under the supervision of Community Corrections. Mr Gibbs’ family believe there was an enormous failure in post-release planning for Mr Gibbs.”

DTL managing partner, Stacey Dowson said, “While Mr Gibbs’ death did not occur when he was in custody, DTL is of the view that the definition of a death in custody must be expanded to post-release care, and so, it must be recognised that a duty of care does not cease on the day of release.”

Nicholas Stewart continued, “This is a matter of truth-telling for Mr Gibbs’ family. They have petitioned for an inquest because they believe Mr Gibbs’ death was preventable. Further, the family wants changes to the way inmates are managed upon release, and while on parole, and seeks to ensure that culturally appropriate supervision for Indigenous parolees is available on release.”

Dowson Turco Lawyers (DTL) welcomes the interim report of the NSW Parliamentary Committee inquiring into gay and transgender hate crimes between 1970 and 2010 in NSW.

The report outlines the interim findings of our parliament and confirms that a “prevailing acceptance of, and indifference towards, violence and hostility directed at gay men, principally during the period prior to the mid-1990s, impacted on the protection of and delivery of justice to victims of hate crimes.”

Nicholas Stewart, partner at DTL, who led the LGBTI community’s push for this inquiry said, “Dowson Turco is grateful for the investment of the NSW Parliament in this issue. We are now making progress on justice for victims of LGBT hate crimes in NSW and I want to thank our community partners, ACON NSW and the Gay and Lesbian Rights Lobby, as well as our pro bono client, Alan Rosendale, for helping to shine a light on this dark period of our history.”

DTL endorses the Parliamentary Committee’s recommendations, but maintains the view that a judicial commission of inquiry with broad powers to compel witnesses to give evidence is required to bring about justice for victims.

The full report can be accessed on the NSW Parliament’s website here.

The NSW Parliamentary Inquiry into Institutional Responses to LGBTI Hate Crimes and the Bashing of Alan RosendaleDTL2018-09-27T09:05:33+10:00 Dowson Turco Lawyers (DTL) welcomes the announcement of a NSW Parliamentary Inquiry into historic LGBTI hate crimes in NSW, including the response of the NSW justice system.

The NSW Legislative Council’s Standing Committee on Social Issues will hold an inquiry into institutional responses to gay and transgender hate crimes committed in NSW between 1970 and 2010.

DTL acts for Alan Rosendale, who was bashed in a violent assault at a gay beat near South Dowling Street in 1989. A third-party independent witness recorded the numberplate of the vehicle carrying the perpetrators and it was subsequently confirmed with senior NSW Police officers that the number plate was that of a NSW Police Force vehicle. The inquiry should investigate Alan’s matter from all angles.

Nicholas Stewart, a DTL partner, said: “We commend the NSW Parliament for inquiring further into gay and transgender hate crimes committed in NSW between 1970 and 2010, and how justice agencies responded to these violent crimes.

“So many victims of this epidemic of LGBTIQ hatred have not received the treatment they would have received had they not been LGBTIQ,” Nicholas said.

“One victim’s mother wrote repeatedly to the NSW Police Force asking for it to investigate her son’s disappearance, but her multiple letters over many years were ignored. It was not until a brave NSW Police officer, Steve Page, saw the victim’s mother’s letters and used considerable personal time and energy to prompt an investigation.”

“It’s time to look at the past wrongs of our justice agencies and ensure not only that they are put right, but are never made again,” Nicholas said.

In May, the AIDS Council of NSW (ACON) released the report “In Pursuit of Truth & Justice”, which looked at suspected anti-gay and anti-transgender homicides that occurred in NSW between the 1970s and 1990s. Among its recommendations was an independent inquiry that would explore the extent of historical violence experienced by the LGBTI community.

“We extend our gratitude to members of the NSW Parliament, particularly those who helped bring about this inquiry. Those members include The Hon. Shayne Mallard MLC, The Hon. Trevor Kahn MLC, Alex Greenwich MP, Ms Jenny Leong MP and The Hon. Penny Sharpe MLC. Their leadership means a lot for the survivors, their loved ones, the families of victims and the broader LGBTI community,” Nicholas said.

DTL has campaigned for this inquiry for many years. We are grateful to our friends in the NSW Parliament but also those friends within ACON as well as Rick Feneley, Susie Thompson, Steve Page, Duncan McNab and Stephen Tomsen. We look forward to assisting victims of hate crimes, including lesbians, bisexuals, intersex people and queer people, to tell their stories and inform our parliamentarians of the extreme violence our community suffered and still suffers.

Book your appointment by calling 02 9519 3088 or emailing enquiries@dowsonturco.com.au Dowson Turco Lawyers (DTL) is alarmed by statements of senior NSW Police Force officers say that they will instruct police officers to ban festival-goers from attending the Above & Beyond event in Sydney this weekend if the festival-goers happen to have a drug dog sit down next to them.

In response to this ostensible overreach of executive power, crime partner at Dowson Turco Lawyers, Nicholas Stewart said:
“The NSW Police Force does not have the power to prosecute civil penalties against innocent party-goers simply because a police drug dog has given an indication that they have drug particles on their clothes or skin. The law requires a criminal act to have been committed before an accused person can be penalised and an indication by a drug dog in respect of a civilian does not, at law, trigger a criminal prosecution. This is a dangerous over-reach of executive power and inconsistent with ancient laws that require accused people be presumed innocent until they are proven guilty of contravening the law.”

“Drug dogs have been shown, time and time again, to be ineffective at accurately detecting drugs on people. Unfortunately, drug dogs remain used by law enforcement agencies in NSW but, if they are used for the purposes of banning innocent people from attending events, then there is a real risk that the NSW Police Force will undermine public confidence in the integrity of its work.”

“Not only is this police activity beyond the legislated power prescribed and delegated by the Parliament of NSW, it is also activity capable of constituting civil torts including the torts of trespass to the person, battery and unlawful imprisonment.”

In response to legal proceedings brought by NSW Greens MP David Shoebridge, Mr Stewart said “David Shoebridge MLC has sought injunctive relief which may or may not be successful. I admire his advocacy on this issue but cannot speak further about the proceedings.”